Look on pages 8, 9 and 16 articles about me at BUCS. To see the original link, click here. 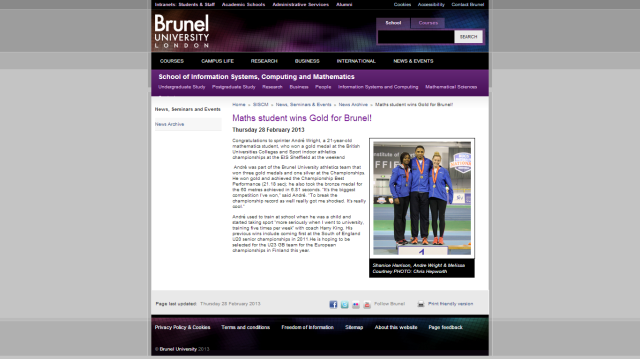 Article from the School of Information Systems, Computing and Mathematics department website. To see the full article, click here.

To see a round up of the articles and videos from the day, click here.

Friday I was running in the 60m heats. In heats I comfortably won my heat in 6.89, with a slower but due to seeing many false starts in the heats before, I wanted to play it save.

The Semi-Finals were a lot better, I got a good start and ran extremely relaxed clocking a time of 6.80 for the win.

Saturday was the 60m final. I felt confident, however being an early morning race, I wasn’t sure how I would feel first thing. I got an okay start, however I couldn’t get up on the shoulders of Tremayne Gilling and Adeseye Ogunlewe who one Gold and silver in the same time of 6.76. I crossed the line shortly after in 6.81 seconds.

Unfortunately the Brunel Relay team were disqualified in the heats due to a change over box error, which meant that I couldn’t run in the 4×200 relay team.

Sunday was a BIG day, with 3 200m races. In the heat, I had lane 2, which I found tough actually, however I managed to run a comfortable 22.11 to win the first heat.

The Semi-Final I knew I had to run really hard to make sure I got a good lane for the final. There were 5 semi finals and they had a long period in between each semi final, which meant that I was waiting for about 40 minutes in the call up area! Despite this I ran 21.37 to win and reach the final as the quickest qualifier.

The Final was extremely nerve racking, I knew that I could potentially get the gold medal I just had to execute and run a good race. I got an average start, however my pick up off the first bend was very good which meant by the second bend I had caught up with Antonio Infantino. As I went round the bend, the distance increased giving me confidence approaching the final straight. I knew that I was running fast, so I called on every ounce of energy to try to see if I could break the Championship record of 21.22.

I crossed the line in a New Championship best time of 21.18 and a new indoor PB! I was shocked and amazed that I won the gold and broken the BUCS record!

Here are a few tweets from the day:

Ooooooosh what a run from Brunels Andre Wright 21.16 indoors is sensational! #Wheels 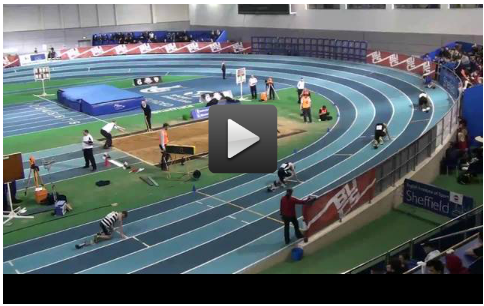 Gold and a Championship Best Performance of 21.18 in lane 5

Catch up with me
Blog at WordPress.com.